The 25th September 2016 will stay with me until my memories as a whole begin to leave me. I’m not sure I’ve ever had such a big build up to an event. There have been huge events, but they often come to pass much quicker, so less time to dwell on what will be.

It’s fair to say that (spoiler alert) as I crossed the line, the sense of pride hit me hard. Was very strange. I was so proud of what I’d done but I think I was disappointed that the fanfare in my head was all there was. It left me a bit flat but not. Maybe I’m just an odd chap. It doesn’t take away the overall feeling of the day and by extension, this whole year.

Moving on from my being a tad dramatic and let’s start a few days before the race, with an email from VoTwo (the organisers) bringing a bit of a crap surprise. It stated that due to Dorney lake containing high levels of Blue-green algae the swim would have to be moved to Bray. No bad thing I thought as it’s where I’ve been practicing, but continued to read and it put me in a bad mood.

The event would go as such:

1 – Head to registration and transition as per normal.

2 – From there, cycle 2.5km to the top of the lake and park up your bike. Take your wetsuit etc with you.

3 – Walk the 1.5km to Bray Lake and when you reach there, get suited and swim straight away.

4 – Upon finishing the swim the time stops. Walk back the 1.5km to your bike.

5 – Cycle back to transition, get ready and continue the race from there. T1 would not be timed.

When I had finished this I started looking towards doing a different tri the following weekend. For all the build up over the course of those 9 months I would not be getting the full triathlon experience. I had a sprint distance lined up for the following weekend, but thankfully, the day prior to the race, another mail came through stating it was now well below safe levels and plan A was back on.

It was at this point I could not wait to get started.

The morning of the race and I was pretty relaxed, so got my stuff ready in plenty of time (although I forgot my race belt) and headed over to Dorney 2 hours before our wave was due to go.

Just after registering, I saw a friend from school who it turned out was doing the same race as Paul and I, which just helped to make the whole thing that bit better.

With the bike racked and everything in place, it was time to get the wetsuit on and head to the start to receive our race briefing. I’ll be completely honest, I have no real clue what the guy said in hindsight, which isn’t great, but I’m here to tell the tale, so I didn’t do anything too untoward. I’ll pay attention next time. Possibly.

After that it was into the water to get ready for the start. I stayed toward the back of the pack just so I wouldn’t be getting passed left and right at the start which I knew could cause me to panic a bit, so thought it best to avoid that. Then we were off.

I kept the pace very steady, probably erring on the side of sluggish but I wasn’t bothered by this. Had gone into the race with the plan of just being as relaxed on the swim as I could to get it done and then go hunting on the bike and run. I did find sighting in the early part quite difficult as Dorney lake has a lot of buoys due to the rowing lanes and with all the chop ahead of me. Fortunately on the first half of the swim I stayed relatively straight and took the turn at the buoy quite wide so as to avoid anyone swimming over me.

Despite the wind now being behind me a bit, I was starting to struggle and my rhythm fell away, which meant that I was not swimming quite as straight as I was in the first half. I kept going, just keeping my arms turning over (was half front crawl, half doggy paddle at this point) and I eventually found myself at the ramp.

I’ve read a lot about people feeling dizzy when getting out of the swim, but I’d kicked more in the last 50 metres to try and avoid this. It had worked quite well and wasn’t out of sorts at all, managing to jog over to my bike whilst getting the wetsuit undone and half down. I struggled a bit to get it totally off but this didn’t bother me. Got my helmet and my bike shoes on and trotted over to the mount line. I felt a bit off at this point and it took me what seemed like an age to get on the bike and clip in, but eventually I did. It was time to go hunting. 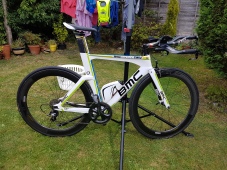 I have to admit at this point that I feel a bit guilty not doing the tri on the trusty Dolan, but the new (well, 2nd hand from ebay), bargain of a race bike came into it’s own and I was flying in next to no time and feeling super comfortable.

The hunting down of people wasn’t quite as dramatic I had made out it would be prior. It turned out I wasn’t that far behind a lot of people after the swim and most people were just doing the tri as a challenge. I can appreciate that 100%, but I still bloody loved overtaking what must have been the better part of 25 people over the 10km course. The BMC was just immense and although only getting it a few weeks before the event, I was able to stay on the aero bars the whole time, minus the sharp turns.

Although there was a fair wind on the day, the training as well as the more aero bike really helped me to barely notice it and maintained a pace that, in hindsight, I could have upped a bit. It wasn’t too big a problem as I felt felt as though I didn’t want to get to the run and be totally blowing up. As with Ardingly though, I did start to feel cramp in my calves when I came to dismount.

I jumped off the bike on the mount line, but struggled to unclip from one of the pedals and almost stacked. Managed to avoid that and trotted over to my racking position. Racked the bike, whipped off the shoes and helmet, took on some liquid to try and help stave off the impending cramp in both legs. Then struggled to get one of my shoes on, so lost a couple of places. Finally managed to get sorted and set off on the run, both calves feeling terrible.

This really annoyed me because my running has been so good recently that I felt I could have smashed the run. I passed 3 people in the first 250 metres, but took until about 500 metres in for my legs to feel a bit better. I passed another 2 people before the turn and saw that the next person was a good 200+ metres ahead of me when I did the switch back.

I kept my pace fairly steady, thinking they were a bit too far in front for me to get, but things finally started clicking with just under 1km to go and I began reeling them in. I passed her (yes, this was mixed age and gender wave), but with about 100 metres to go, I heard people yelling at her to take the place back before the line and before I knew it, she was on my shoulder and running hard. Thankfully, with my legs having come back to me, I managed to put the hammer down and sprinted away from her. It killed me but was totally worth it. Looking at the results later, it turned out she had the fastest swim of the entire wave, so was certainly no slouch.

And so, the results, which you can see below. Finishing 15th out of 52 finishers was better than I ever thought was possible in the first race. Paul utterly smashed it, coming in 5th. So happy for him.

My swim bought me out in 46th of the 54 that completed the swim, which I was oddly proud of, I genuinely thought I would be dead last.

Even better though is having the 2nd fastest 10km bike split (although I really wanted to get into the 16 minute zone for the bike) and also the 4th quickest 2.5km run, hitting my target of sub 10 minutes and that is with bad legs. Needless to say, it’s obvious where I need to focus a lot of effort over the winter, especially given my sprint finish chum was done with her swim in less than half the time I was.

As mentioned right at the start, I am so proud of myself for this and I’ve definitely caught the bug to do more. So I shall be boring those around me with this for the foreseeable future.

What’s next? A solid winter of training. I’ve had a couple of easy weeks since the race and now looking to get back into the swing of things, focusing more on speed for each of the disciplines, which will likely mean getting back to Crossfit to get some more strength and conditioning work.

The plans for next season are to start with a sprint tri, get the half marathon done, do a couple of Time Trials and then hopefully finish the season doing a standard distance race. No definite races booked yet. Plus, already got a race planned for 2017 that is Half Iron distance in another country. Really excited about the prospect of that but a long way to go.

I shall keep the blog updated from time to time, but I have to say thank you all for reading this and for the support. All the comments have been great and the advice given, very much appreciated.

Will sign off, for now, with a picture of this guy, who does always push me to improve. 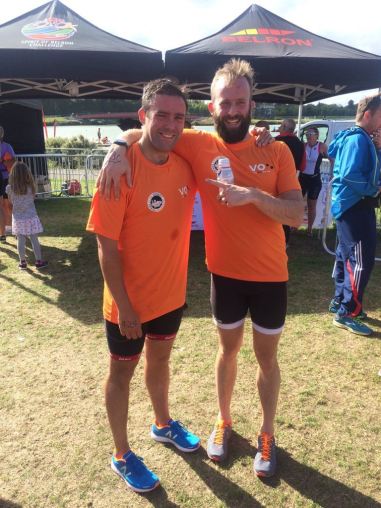